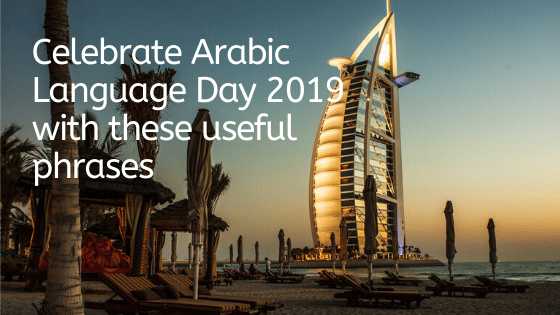 UNESCO’s Arabic Language Day is on Wednesday 18th December. The aim of this day, as with other national language days, is to promote linguistic and cultural diversity and raise awareness of this official United Nations language. Arabic is one of the six official languages at the UN.

Arabic is also the fourth most important language for UK businesses, organisations and government, according to the British Council in its Languages for the Future report. The UK government has identified Arabic speaking countries such as Bahrain, Oman, Kuwait, Yemen, Iraq, Saudi Arabia, UAE and Tunisia as some of the top overseas markets for business development. As such, there’s high demand for a range of Arabic language services including language training, translation and interpreting.

Learn more about Arabic and the Languages for the Future here.

Arabic phrases from across the Middle East

Although this is predominately a UN celebration, Arabic Language Day is an excellent opportunity for us to remind ourselves of the importance of the Arabic language and culture. With a rich cultural history and many different dialects, Arabic is an exciting language to communicate in.

The video below from The National, an English news publication for the UAE community, shares some great Arabic phrases used in different Middle Eastern countries:

If you have a favourite Arabic phrase, we would love to hear from you! Leave a comment at the end of this post.

There are roughly 9 different Arabic dialects that are commonly spoken across the Middle East and North Africa. Fortunately, most are closely related so people from different regions can understand each other, although the differences between North African and Middle Eastern dialects are more pronounced.

When it comes to the written word it’s much more straight forward, as Modern Standard Arabic is the official Arabic language used in publications, official documents and advertising. However, as you can see from the phrases in the video above, there are many different cultural idiosyncrasies which are important to know about if you want to communicate effectively in different regions. A popular saying or expression in one country won’t necessarily have the same impact in another.

Having a cultural understanding is the key to successful communications whether you’re face-to-face in a business meeting, or targeting Arabic speakers in your marketing content. For help with this, we have a network of native Arabic linguistics who provide Arabic translations services for business communications and marketing. Please get in touch if you would like to learn more.