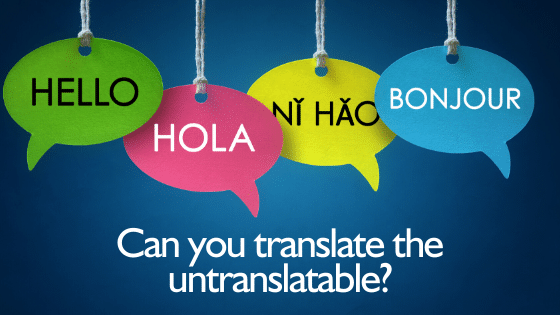 It was a joy when a recent episode of the Radio 4 comedy panel show, The Unbelievable Truth, opened with a segment on the subject of words. Not only did it enliven a boring motorway journey, it swiftly segued into the topic of translation, one that’s clearly very close to our hearts!

For those of you not familiar with the show, The Unbelievable Truth is a panel game in which four comedians are encouraged to tell lies during a short lecture and compete against one another to find out how many items of truth they are able to smuggle past their opponents. Hosted by the irrepressibly witty David Mitchell, it’s a thirty-minute masterclass in hiding unlikely truths, including the naturally blonde Elvis’s ownership of a chimp, amongst complete flights of fancy, such as fifty percent of Elvis impersonators hailing from Scandinavia.

Comedian Tony Hawks was lucky enough to be given the ripe topic of words and took to the floor in an attempt to smuggle five truths past his opponents. Having lulled them into a false sense of security by opening with pure facts, he soon made the following contentious claim, “Welsh words are simple to translate with no knowledge of the language, yet the following mistakes were made in 2006: the Welsh words meaning ‘this door is alarmed’ were translated as ‘push off’, the words for ‘no entry’ were translated as ‘come in’ and the words for ‘cyclists dismount’ were translated as ‘bladder inflammation upset’.”

This earned a roar of laughter from the audience and a challenge from Henning Wehn, the self-styled ‘German Comedy Ambassador to the UK’. Having moved to the UK in 2002 to work in the unlikely surroundings of Wycombe Wanderers’ marketing department, Henning showed signs of translation trauma when he wrongly proclaimed that all three assertions were true, losing him a point.

Tony’s subsequent claim that the Czech word ‘prozvonit’ means ‘to call someone’s mobile so they have your number’ raised the thorny topic of untranslatable words. This factually accurate gem initially crept past his challengers until the penny dropped.

At the end of his round, Tony smuggled through two truths, the erroneous Welsh translation of ‘cyclist dismount’ into ‘bladder inflammation upset’ being one of them. The other, unfortunately, is a little too rude for this blog.

Can you find the truth?

Our expert team of linguists speak over 200 languages. Can you take their challenge and find the right translation for each seemingly untranslatable German word below?

A: Feeling homesick for a place yet unvisited.
B: A feeling of pleasure at the bad things that happen to others.
C: The feeling of happiness caused by a fulfilling job.

A: Flustered to the point of incompetence through nagging.
B: To look worse after a haircut.
C: To sit outside on a sunny day enjoying a beer.

Word three: Treppenwitz
A: The feeling of awkwardness that arises when watching someone else make a mistake.
B: The urge to get things done or start new tasks.
C: A great comeback that springs to mind after the moment has passed.

See below for answers (don’t cheat!)

Want to listen for yourself?

You can hear this episode of The Unbelievable Truth on the BBC website. Other topics include Elvis, ferrets and education.

1: Perhaps we should count our blessings that we’ve never felt the need for a word that means ‘the feeling of pleasure at the bad things that happen to others’, as schadenfreude does.

2: Fisselig means flustered to the point of incompetence through nagging. It’s best never to accuse anyone of being fisselig, in case you are accused of nagging them into that state!

3: A treppenwitz is a great comeback that springs to mind after the moment has passed. It literally means ‘stair(case) joke’ because it happens on your way out.