Hello! Ciao! Здравствуйте! And Season’s Greetings! A warm, wintry welcome back to Global Chatter, Comtec Translation’s digital spot for sharing the latest and greatest translation news, views and blogs from right across the world and web. Every month we keep track of what’s going on with translation online, then share our top posts with you.

This month, find out what it’s really like to translate for politicians, read award-winning translated novels and debate the merits of native vs non-native translators.

What is it really like to translate for politicians? 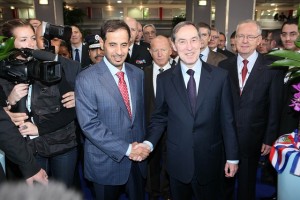 It’s often seen as one of the most glamorous corners of translation. Political intrigue, delicate diplomatic situations and, at the heart of it all, the translators who make sure that not a word is misinterpreted. But how does the reality correspond to the fantasy? Well, if the Jenner twins’ blog is anything to go by, there’s a lot more confusion and far colder hands involved than you may have thought.

Multilingual twins Judy and Dagmar Jenner write one of the web’s most widely read translation blogs, sharing their experiences and knowledge with readers as they translate to and from English, Spanish, German and French. If you’re interested in the realities of working as a translator, their blog Translation Times is well worth a read.

The Hugo Awards are an annual ceremony held by science fiction lovers to celebrate the best of their genre. When the winners of the Hugo Award were announced back in August, translators the world over were delighted – 2015’s award winner, The Three Body Problem, was the first translated novel to scoop the award. Best of all, its translator Ken Liu was given prominent recognition alongside author Cixin Liu. With the translator’s name displayed clearly on the cover of the translated Chinese best-seller, many translators in the industry are pleased as punch to see one of their own get their dues. Story via: Riccardo Schiaffino of About Translation.

We can all understand the importance of utilising translators who are translating into their own native language. With a natural ear for their mother tongue, translations are generally assumed to read more fluently and be more accurate and more “of the moment”. But how much of a difference is there really between native and non-native translation? This is the question the excellent Inbox Translation blog sets out to answer in this fascinating post. Keep reading for some very interesting answers.

Would you prefer a non-native translator over a native-speaking translator? Do you think translators of novels get their fair dues? Have your say below.