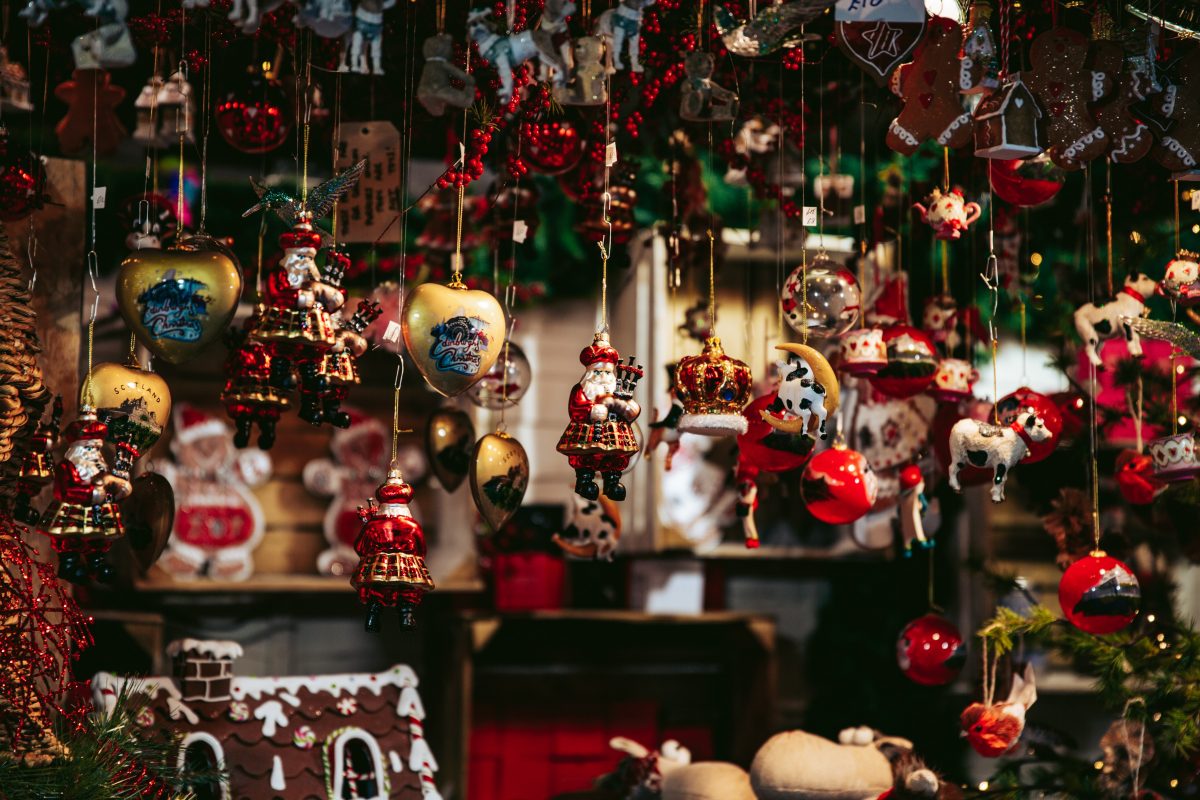 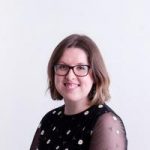 Christmas looks different around the world. We asked our linguists to share what Christmas traditions look like in their home country.

From Christmas day Karp to luxury hotel stays and porridge eating gnomes, it really is the most wonderful time of the year. Here’s how our linguists celebrate the festive season from Japan to the Czech Republic. Take a look at this video or read below for even more traditions (including our founder Isabella).

Christmas in Japan, by Chie

Christmas is not really a Japanese tradition. But do we still celebrate it? We certainly do! We tell our children that Santa will come with presents if they are good, and we also have Japanese versions of traditional Christmas songs, for example, can you guess what the below song is?

Christmas Eve is also probably the most romantic, important evening of the year for young couples who will often book fancy restaurants, cook a delicious Christmas Eve dinner or stay at an expensive hotel for a festive treat.

Christmas in Germany, by Rebecca 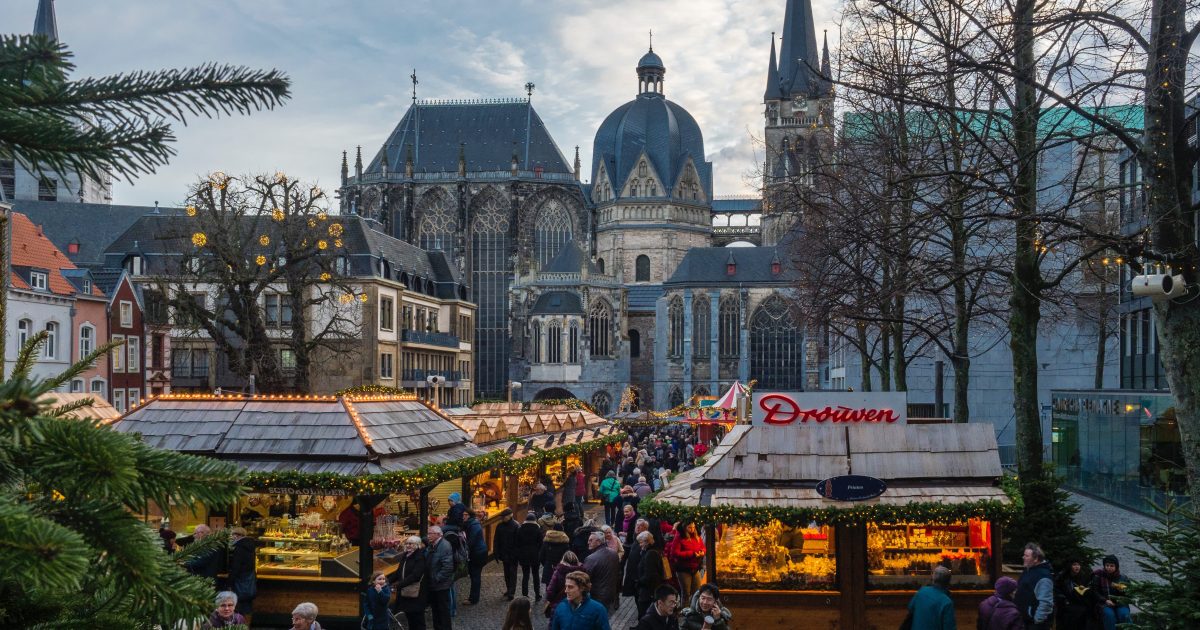 In Germany, we love to drink Glühwein at the Christmas market—which can leave you with quite a bad headache! We also have the traditions of the Adventskalender (complete with little chocolate treats) and Adventskrant where we light a candle every Sunday of advent. Of course, we also love our Christmas trees (Weihnachtsbaum) nicely decorated with, often kitsch, decorations and the Krippe underneath – a kind of nativity scene.

On the 24th of December, it’s not Santa Claus who brings the presents, but Christ’s Child or ‘Christkind’. The Christkind even has a physical address where children from all over the world send letters. Interestingly, most of them receive an answer—so you may want to try your luck too!

Christmas in Norway, by Svanhild

When I grew up in the Norwegian countryside, we had a tradition of putting out a bowl of porridge in the barn on Christmas Eve for little gnome-like creatures to come and eat. These creatures were believed to live on every farm and it was thought they took care of the animals, hence they were rewarded with porridge for Christmas.

It was also believed that the animals could talk on Christmas Eve. Now, I personally never managed to gather any proof of this, but on the 25th December (the morning after the porridge had been put out) it was always gone. So…who knows?

Christmas in the Philippines, by Nadine

The Philippines is a tropical country where it is summer all year round—so we don’t have a white Christmas like most of you do. But during the holiday season, Filipinos hang a paról outside their homes (a star-shaped lantern). They come in all kinds of sizes, colours and designs and are made from beautiful capiz shells, also known as windowpane oysters, which are very abundant in the Philippine seas.

Christmas in the UAE, by Nouma 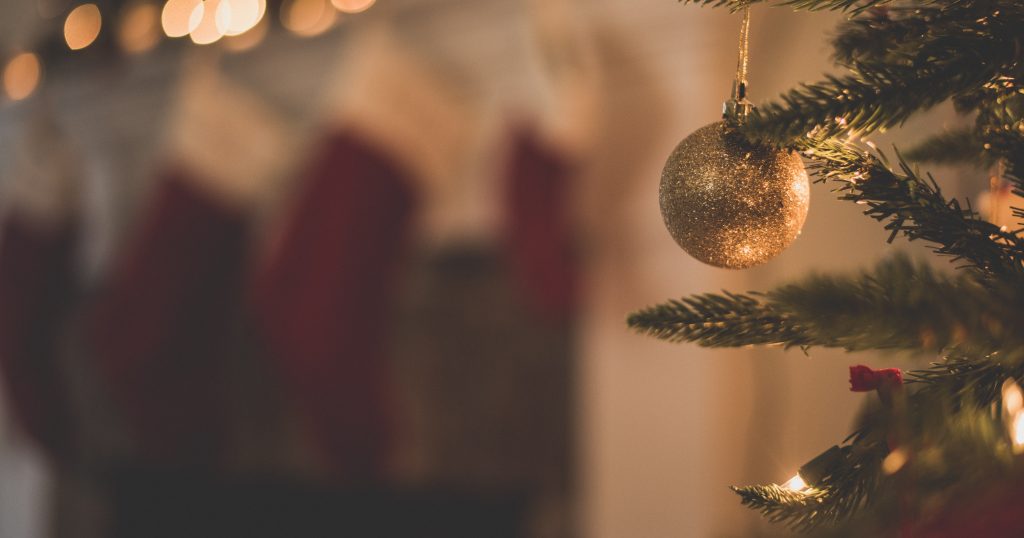 Every year we celebrate Christmas together, we usually do decorate the tree in the middle of December. Then, on Christmas day we sit together at the table and have dinner together. Overall, it’s a very pleasant time. This year however, we cannot do that as our son is studying in Spain and can’t come back home due to the pandemic, but we will have a virtual dinner online!

Christmas in Spain, by Carlos

In Spain, we have many different Christmas traditions depending on which part of the country you are in. But there is one thing we all do together every single year, and it happens on New Year’s Eve.

To bring in the New Year, everyone in Spain eats 12 grapes—one to every bell strike of the clock, for good luck. As you might imagine, it can be a bit of a challenge to swallow the 12 grapes on time, but you are allowed to prepare in advance. You can peel your grapes or even remove the seeds. In our tradition, it is important to get them all down before the end of the countdown to make sure you have extra luck for the year ahead.

Christmas in China, by Ping 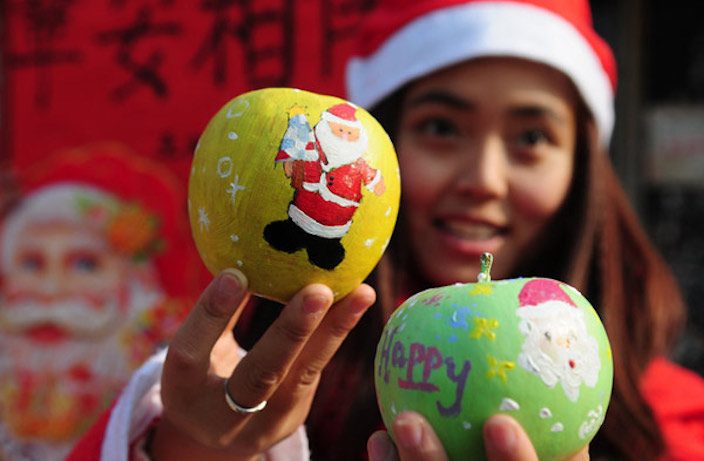 Christmas is not a national holiday in China, however, many young people like to celebrate it. They’ll meet up with friends and family and have parties.

One interesting trend we have here is the giving of apples on Christmas Eve. This is because ‘Apple’ in Chinese is ‘Píngguǒ’ which sounds like ‘Ping’an Ye’—the Chinese word for Christmas Eve. Because of this, during this period, in some shops apples are often sold pre-wrapped accompanied by printed messages of love and peace.

Christmas in Brazil, by Denise

I have three essential words in Portuguese that Brazilians say at Christmas.

Papai Noel, aka Father Christmas. Christmas Eve is very important because our large families get together for supper. We always stay up until midnight, waiting for Papai Noel, who brings presentes (presents) for everyone. When we open them, we say to each other, Feliz Natal! I wish you all Feliz Natal and Merry Christmas!

Christmas in Italy, by Lorena 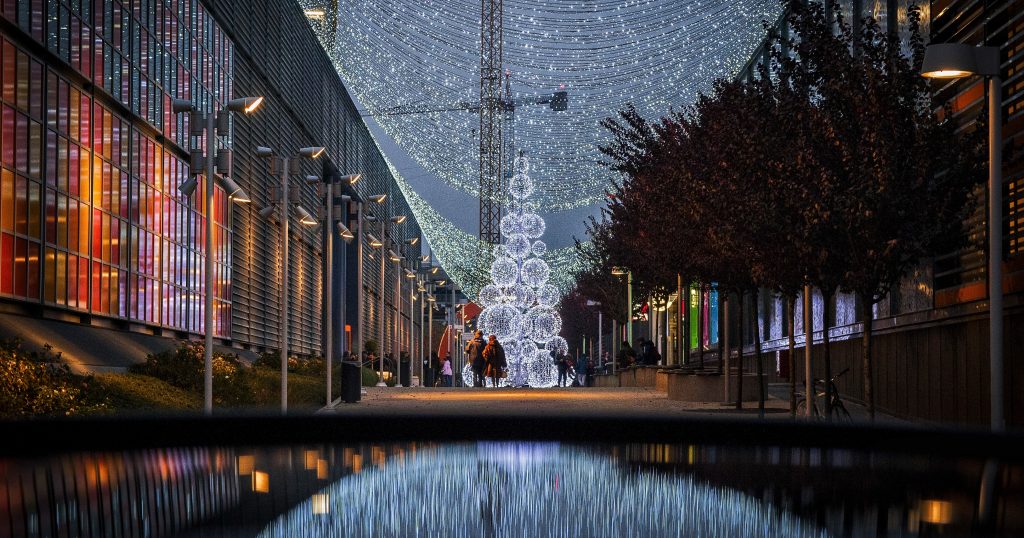 We have many Christmas traditions in Italy. In the south of the country, most families will have a big dinner on Christmas Eve, which is generally fish-based. In the north of the country, it’s more about having Christmas lunch, usually with stuffed meat or tortellini al brodo. Of course, we also have plenty of sweets like panettone (which everyone around the world knows) but also more regional dishes like struffoli, which are made in the Naples area.

Many people go to church at midnight, and when we come home, you open the drawer where you keep the baby Jesus (who was born at midnight) and place him in the centre of your nativity scene. We generally have a nativity scene together with a Christmas tree.

Christmas in the Czech Republic, by Zora

In the Czech Republic, the most important time during Christmas is the 24th of December: Christmas Eve—which we call Štědrý den. This is because we receive our Christmas presents on this day. Before that, however, we have our traditional Christmas dinner, which is Karp (a freshwater fish) fried in breadcrumbs and served with potato salad.

Then, after dinner, we wait to hear the ringing of a bell which symbolises that the Baby Jesus has been, and we can go and collect our presents from under the Christmas tree. If we’re lucky, it will also begin snowing, meaning that we can go to the mountains where we can ski and have fun in the snow!

Christmas in France, by Véronique 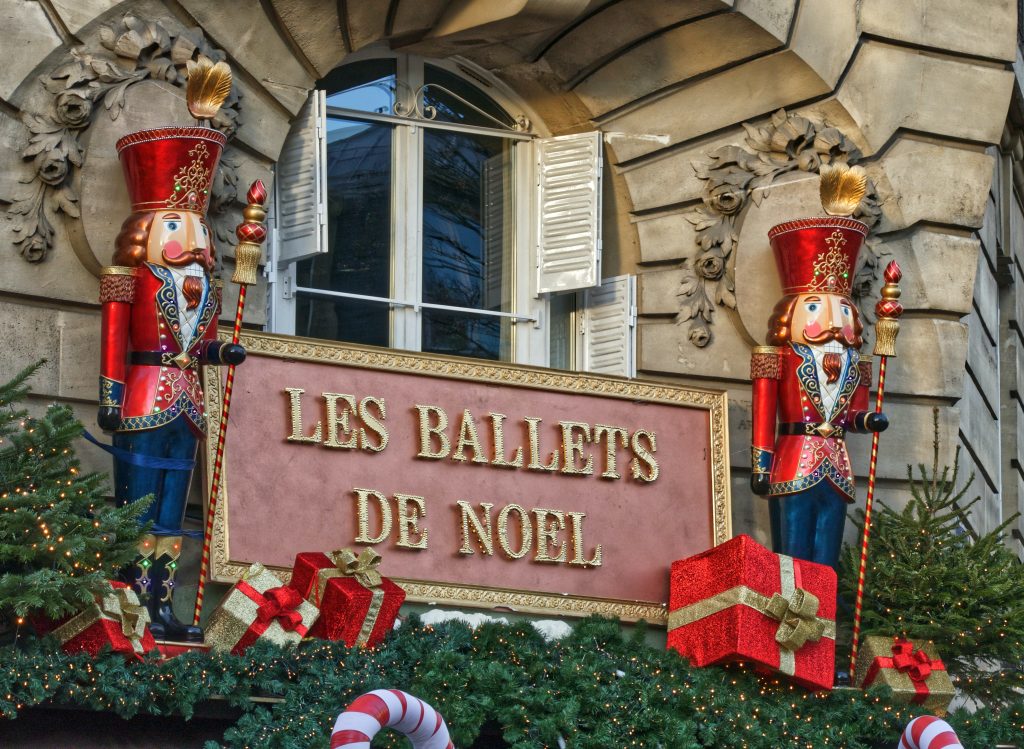 The main difference between Christmas in France and England is that most people in France start celebrating on Christmas Eve. In my family, we usually have a little buffet with canapés, smoked salmon etc. and some champagne. We all stay up past midnight and exchange our presents straight away. People with children sometimes wait until the next morning, but we never do! On Christmas Day, we have a lazy breakfast and call family members who aren’t present to wish them a Merry Christmas. Later, we have a proper Christmas lunch. We usually have seafood, oysters, smoked salmon etc. for starters, along with champagne, and then a roast goose or capon with chestnuts (which is quite traditional) and various vegetables (no sprouts!) for the main course. The traditional dessert tends to be a chocolate yule log.

Christmas in Sweden, by Susanne 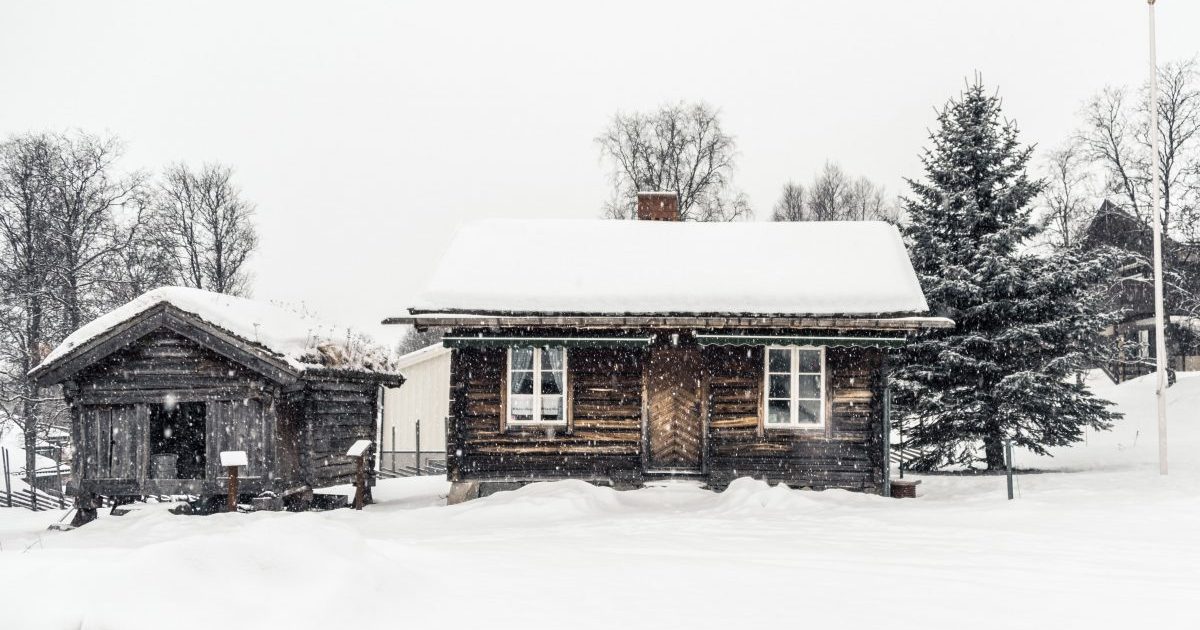 In Sweden, we celebrate Christmas on Christmas Eve and throughout the afternoon we’ll be awaiting Santa’s arrival around 4 pm, bringing presents for the children. When Santa arrives he will be offered a drink of ‘glögg’ (mulled wine) served with raisins, almonds and gingerbread biscuits to nibble on, while the children open their presents in front of the Christmas tree. All of the adults will probably be snacking on homemade Christmas toffee. Christmas dinner in the evening will be very traditional with boiled ham, Swedish meatballs, ‘prinskorv’ (cocktail sausages), ‘Janssons frestelse’ (a gratin with potatoes, onions, filets of Swedish anchovies and cream), red and green cabbage, a variety of pickled herrings, ‘gravad lax’ (dill-cured salmon with a mustard sauce) and many more items. For dessert, we will have ‘Ris a la Malta’, a rich rice pudding with whipped cream. Hopefully, we will have a white Christmas with lots of snow!

A Polish-British Christmas in the UK, by Comtec Director Isabella Moore

It’s difficult sometimes to combine both Polish and British traditions at Christmas. In Poland, it is also Christmas Eve that is celebrated from about 5 pm with twelve non-meat dishes on the table as well as cabbage and meat dumplings and smoked herring. Thank goodness for the large Polish delicatessen shop in Coventry! We exchange a present on Christmas Eve and the rest on Christmas Day. My mother brings from Poland a wafer that has been blessed in church, which we divide up and offer to each member of the family with a blessing. Of course, this very private family tradition does not always suit younger members of the family, who are keen to meet up with friends on Christmas Eve!

In Zurich, we have a special advent tradition called ‘Märlitram’ (fairytale tram). This tram was built in 1913 and is thus the oldest ‘active’ tram in Zurich. Since 1958 it’s only been used between the 1st and 23rd December. Only children between 4-10 years old are allowed to ride it, while their parents wait outside in the cold. ‘Samichlaus’, the Swiss Santa Claus, drives the tram while two angels look after the children, singing to them and telling them stories. The tram drives around downtown Zurich for approx. 25 minutes and each year 10,000 children take a ride on board. For parents it’s a bit of an adventure as well,  as they have to buy the tickets (only CHF 8) a week in advance – they are also only sold in one shop and only on one day of the week. So you have to queue up quite early in the morning on that day to make sure you can buy tickets for the week to come!