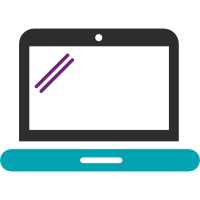 Today we can confidently say that we live in the ‘Age of the Internet.’ The web has changed our hobbies, our jobs and perhaps most profoundly, our language and means of communication. Imagine if, ten years ago, a friend said “I just need to retweet that…” You might have thought that they’d suddenly become an avid (if somewhat eccentric!) bird enthusiast. Today, however, terms such as streaming, unfriend and tweet have become part of our everyday vocabulary. And it’s not just our lexicon that’s been changed by the internet. According to the renowned linguist, Professor David Crystal, the very way we write has evolved too. The concise nature of emails has brought with it a truncated and informal style, with our exchanges simplified, abbreviated or even supplemented entirely by emoticons!

Protecting ourselves against the internet

However, the internet’s linguistic impact isn’t just limited to the English-speaking world. We might talk about a world-wide web with websites available in hundreds of languages, yet more than 55% of online content is written in English. The dominance of English on the internet has been met with defensive linguistic policies by many countries, fearing that its prevalence will take a toll on native linguistic culture. France’s Académie Française, the official custodian of the French language, has long fought to preserve the French language in the face of Internet derived Anglicisms. Closer to home, the internet is seen as a threat to the existence of minority languages. In recent years the Welsh Academy has sought to create its own internet lexicon to prevent Welsh speakers from simply assimilating English terms into the language, threatening its linguistic purity.

Are we exaggerating the internet’s influence?

Nevertheless, we could be too quick to overstate the internet’s influence on our language. David Crystal writes that “the Internet has only been around for some 20 years, which is no time at all. It takes a lot longer for permanent or significant language change.” Despite a few additional abbreviations and neologisms, most people speak English today as they did before the arrival of the internet. Although we cannot deny the dominance of English as the lingua franca of the internet, the web also offers the opportunity to make content in different languages more accessible. Today, newspapers, journals and even language courses are available in almost every language at just a click of button.

While it remains an open question as to the internet’s positive or negative impact on the format, content and usage of language, the web has had an undoubtedly positive effect in one crucial aspect: The internet has empowered language and its constituent speakers and writers with the ability to express and to converse with an audience of which the scale is unprecedented in human history.

You’ve probably guessed by now that we’re incredibly enthusiastic about all things languages! So if you have a question or would like to know more about us, please get in touch at info@comtectranslations.com or call us on + 44 (0) 1926 335 681.