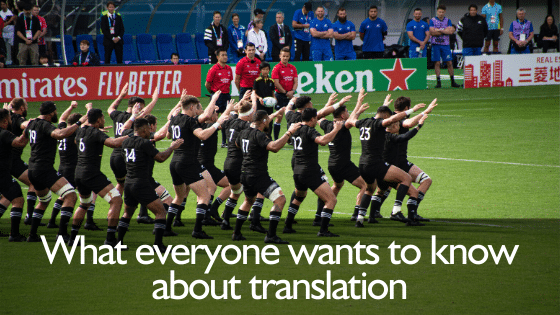 By James Brown
February 25, 2020
Culture and Localisation
Answer the public

This week, we’ve been looking at the most popular Internet searches relating to translation. We think you’ll be as surprised as we are:

There’s still a lot of interest in translations of The Iliad. Of course, few of us have the ability to read Ancient Greek these days (by 2013, only 37 English state schools offered it at A-level), but we were still surprised to see Homer’s epic poem in such demand. Oddly enough, although Ancient Greek isn’t one of the 200 languages we’re asked to translate into each year, Latin is!

There are oodles of ‘will…?’ questions but none made us catch our breath like this one: ‘Will translation jobs disappear?’ Certainly, the rise of translation technology has made many people nervous, as there are a slew of enquiries using similar wording, but it’s not game over for translators just yet. So far, no technology has managed to match the sheer brilliance of the Babel Fish from The Hitchhiker’s Guide to the Galaxy. We may be biased, but we know that our translators are the next best thing to a little yellow fish that you insert into your ear.

We were intrigued by the query: ‘Can translation occur in the golgi apparatus?’ Having visited Wikipedia and read up on the subject, we can safely say that we’d benefit from having the page translated into Plain English. Non-scientists, we recommend you steer clear. As well as featuring in science, translation is also a term used in geometry. Thus, ironically, the word ‘translation’ has multiple meanings, making it hard for an online translation tool to translate correctly!

The Rugby World Cup may have prompted the search: ‘translation for the haka’. Until 2006, there was just one haka, a war cry called Ka Mate which dated back to 1820, but the addition of Kapa O Pango in 2006 gave the New Zealand men’s rugby union team, the All Blacks, the opportunity to have a haka for their own exclusive use. Until then, they had shared the haka with a range of other sportsmen and women including the New Zealand Men’s Basketball team, the wonderfully nicknamed Tall Blacks.

The ‘new’ haka can be translated as:

All Blacks, let me become one with the land

This is our land that rumbles

This defines us as the All Blacks

Our supremacy will triumph

And will be properly revered, placed on high

One final search bought a lump to our throats: ‘translation for time to say goodbye’. Luckily, having Googled it, this turns out to be a popular song by Andrea Bocelli and Sarah Brightman and not one of the saddest Internet searches we’ve ever seen.

But, for this blog, it is time to say goodbye. Don’t forget to let us know if there’s a topic relating to language or culture that you’d like us to look at in a forthcoming blog, we’d love to hear your ideas!

If you would like to read about an interesting TED Talk on ‘4 reasons to learn a new language’, then click here.

We used the free search facility on answerthepublic.com to get an insight into what other people think about and search for. If you’re not familiar with the site, do take a look. Be warned, it’s addictive!